Lack of Sleep May Increase Likeliness of Heart Attack and Stroke 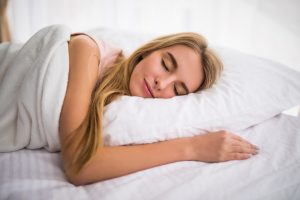 There are plenty of reasons why it’s important to get your beauty rest, so to speak. For one thing, calling it “beauty rest” isn’t so far-fetched; when you don’t get enough sleep, your skin is more likely to sag and look dull and lifeless, and of course, those pesky dark circles and puffy bags under the eyes tend to be symptomatic of lack deprivation too. Moreover, it’s just not healthy, and your overall health, energy levels, and even life expectancy could be deleteriously affected by not catching enough Zs. And now—as if you didn’t already have plenty of reasons to prioritize getting your solid 7-9 hours—we have yet another reason to take sleep seriously: if you don’t, you might be increasing your risk of heart attack and stroke.

The Research
Recently, research was published in the European Journal of Preventive Cardiology which shows a marked correlation between insomnia and a heightened risk of heart attack and stroke. It also states that adequate sleep is not just recommended, but absolutely necessary for biological recovery. The problem therein is that insomnia is becoming a more and more widespread and difficult problem to rectify. While it was already known that lack of sleep has a generally deleterious effect on one’s health, it was not known to exactly what extent, or what kinds of specific dangers were linked to sleep deprivation. Now, however, these research findings indicate probable links between insomnia and stroke and heart failure.

Findings
The research team responsible for these findings looked at 15 studies with more than 160,000 participants and eventually determined that strong ties exist between difficulty falling asleep, maintaining sleep, or getting sleep that didn’t feel restful (called “non-restorative sleep”), and risk of stroke and heart attack. Notably, it was also found that women with insomnia had a slightly higher risk of stroke and heart attacks related to lack of sleep than men with the same trouble sleeping. This is likely due to the fact that women are more prone to bad sleeping habits due to hormonal differences.

In short, if you don’t go to bed in time to get your full 7-9 hours, you need to change your daily routine and make time. Moreover, if you suffer from any form of insomnia such as un-restful sleep, difficulty falling asleep or staying asleep, and lifestyle changes don’t fix the problem, you need to see a professional. You might not think that poor sleeping habits are worthy of a doctor’s visit, but you should start changing the way you look at such things sooner rather than later because the price of failing to do so could be a fatal or life-changing stroke or heart attack.