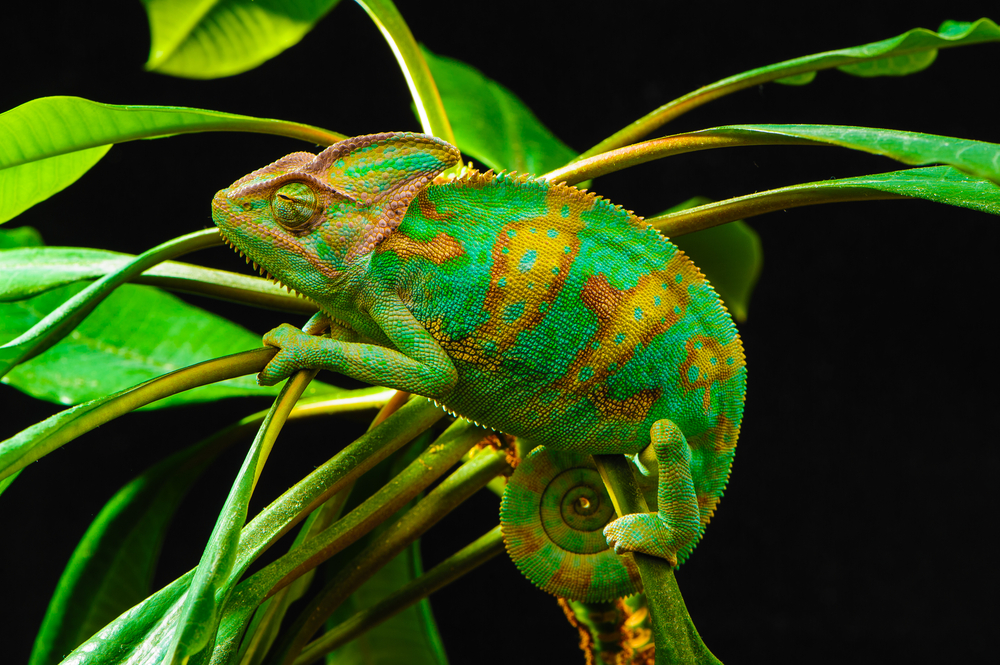 Chameleons, octopuses and other color changing animals have fascinated people for a long time. It’s been surprisingly difficult even to work out how they do it, let alone replicate their natural talents with artificial materials. Recently, however, scientists have made headway by creating the best ever approximation of chameleon skin.

Chameleons change color with a mechanism that’s both simple and remarkably complex. Their skin is actually packed with a layer of thousands of tiny mirror-like crystals that only reflect certain wavelengths of light. Whatever wavelength is being reflected by a patch of skin, is the color that patch appears to be. When relaxed, all these tiny mirrors are packed more closely together and they reflect smaller wavelengths like blue and green. When they tense up, these mirrors are further apart and they reflect larger wavelengths like orange and red.

Now, inspired by such reptilian ingenuity, a team of engineers from California have created a material that does the exact same thing. They developed a layer of silicon, about a thousand times thinner than a single human hair and covered it with a flexible film. The silicon is covered with countless tiny, reflective ridges. In its normal state, these ridges and packed closely together and therefore reflect shorter wavelengths – the purples, blues, etc. However, when you stretch this material out the ridges get further apart and start reflecting longer wavelengths like red.

With a bit of inventiveness, this could have all sorts of applications. There are the obvious things, like camouflage that can change on the go, but also a host of more obscure uses. And what about cosmetics? Could we create lipsticks that only ‘turn on’ when you smile? Makeup that compensates for changing weather? The answer is a resounding maybe. It could, however, almost certainly change the world of sunscreen and clothing.

That’s the other thing chameleons use their crystals for. You see, they actually have two separate layers of these micro-mirror-crystals and each layer handles a different set of wavelengths. We’ve been talking about the top layer, which deals with wavelengths in the visible color spectrum. Their second layer is even more spaced out, and handles light with an even longer wavelength – the stuff in the infrared spectrum. They use this for incredible control over body temperature. It’s like how wearing white is cooler than wearing black because it absorbs less heat, except more so.

That’s where a lot of the potential applications of this new technology lie. Imagine super-effective sunscreen that can be used by anyone regardless of allergies or sensitive skin. Or clothing that can switch between repelling and absorbing heat, or jackets that can on reflective strips when you need to run across an eight lane highway at night. These are just some of the obvious applications. Odds are that this versatile technology’s main use will be something no one could have anticipated.