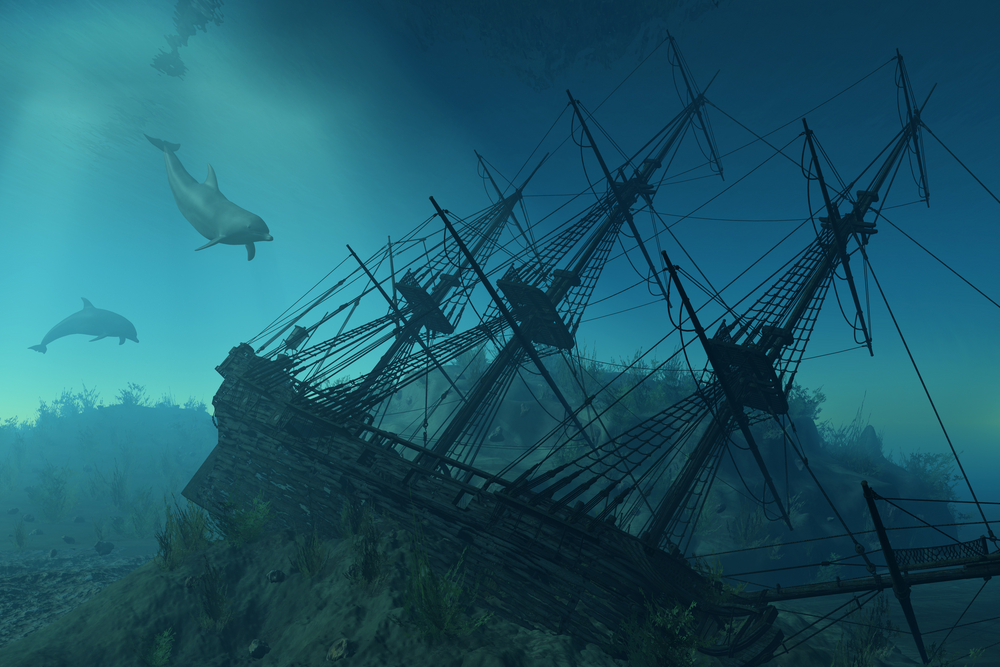 The oceans of the world are vast and have provided fodder for many mysteries across the years. Before we’d mapped the world, cartographers would put “Here Be Dragons” on unknown parts of the world or put sea serpents in the water. It took a long time for us to realize there were no dragons and while there might be sea serpents…well, they aren’t nearly as impressive as legends would have us think. We’ve gotten so used to thinking we understand the world that we accept particular things as a given. In truth, there is plenty about the ocean we have yet to learn and some “common facts” people take for granted aren’t true at all. These are the modern myths and tales about the ocean. Sometimes they are about anomalous phenomena and sometimes they are there to convey a dire environmental warning. Regardless of their purpose, we’re taking a look at some of the famous ocean myths.

The Bermuda Triangle
It may seem quaint to a lot of people to mention the triangle today, but the truth is many people still believe in it. The claim is that it is a section of water neatly contained in a triangle defined by the island of Bermuda, Puerto Rico, and the tip of Florida. People continually say ships and planes vanish in a greater number in these waters. There are also countless tales of supernatural events going on within the triangle that supposedly defy explanation. While we can’t pass judgment on the latter claims without more than folkloric stories passed around over campfires, we can know the number of disappearances in the area. Ships and planes genuinely do not disappear at higher rates within the triangle. No government has ever reported it as such and the records of the United States clearly show losses occur at standard rates just like that do in similar patches of open water. The triangle only exists in quiet, unnerving tales exchanged in hushed whispers among friends, but it certainly makes for a good story.

The Pacific Garbage Patch
There’s a lot of talk about there being a great patch of garbage floating around out in the Pacific. Most people picture a roaming, floating island of garbage. It makes for a striking image. If you could go out into the Pacific and find the island and walk around on it, then people are sure that people would recognize the impact that humans are having on the world. Unfortunately, this version of the Pacific Garbage Patch doesn’t exist. People use images of water as far as the eye can see to try to disprove its existence. This is disingenuous as the garbage patch does exist. In truth, it refers to an area where the current trap tons of micro debris floating around in the ocean just beneath the surface. Flecks and specks of plastic, styrofoam, and other garbage from civilization swirl just beneath the surface in an easily retrieved slurry. This is actually far more devastating than the popular image of the garbage patch and seems like it will ultimately be a sign of things to come if we don’t fix things.

Atlantis
This is the grandfather of all ocean myths. Depending on the interpretation, Atlantis is either a lost city on a small island or an entire lost continent that vanished beneath the waves. People continually point back to Plato as attesting to its existence and every undersea ruin people find or think they’ve found almost instantly brings “Atlantis” to the lips of the media. This is a sad misunderstanding of what Atlantis actually was though. Plato does mention Atlantis, yes, but the language he uses and the way in which he uses it always clearly told most scholars he was using it within a philosophical argument. We’ve all encountered the philosophical problems that people use to gauge morality like “Would you sacrifice one person to save five?” Plato’s Atlantis was a more complex form of this used to demonstrate his views on how states should operate for the greatest nobility and virtue. It never existed outside of philosophy, but has created one one of the most enduring myths in the world.

The ocean continually draws our imaginations because of how much we think we know with the quiet knowledge that we know very little. Deep beneath the waves are countless secrets that we have no way of truly knowing yet. Mapping the ocean floor will be one of the next great steps in human achievement. Who knows what we might find when we dive deep enough beneath the waves?