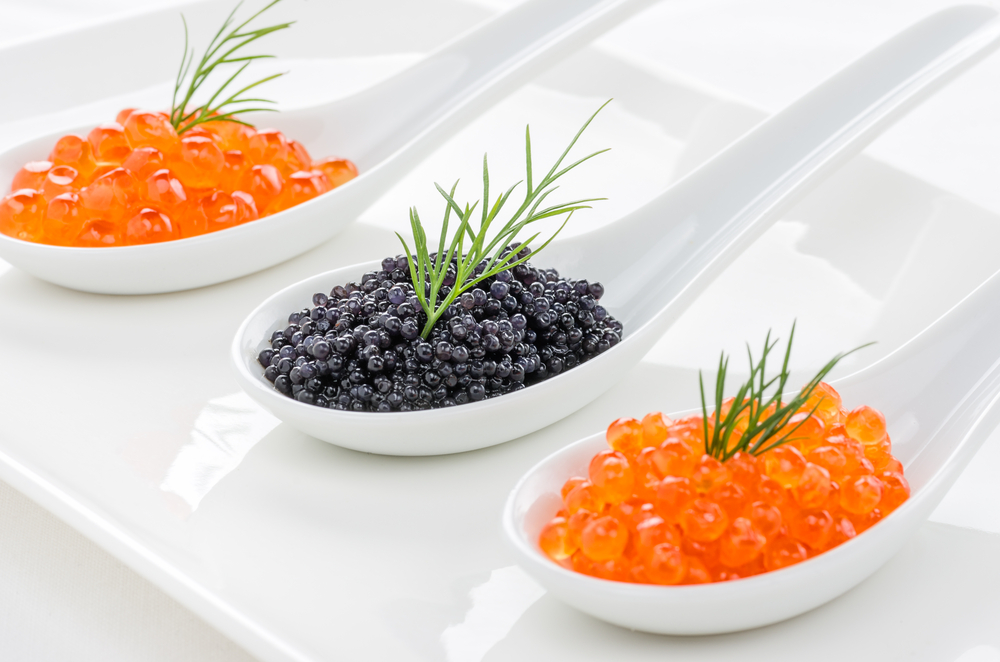 Caviar is a somewhat less defined word than it used to be. If you’d asked people in centuries past what it meant, they’d have told you it meant the roe, fish eggs, or particular kinds of sturgeon. Sturgeon caviar remains among the more exclusive kinds of caviar in the world, but it has ceased to be the only kind. Traditionalists may reject them, but today, you can find “caviar” from a variety of fish from around the world. They are put through the same kind of grading and inspection as sturgeon caviar, but bring a different look and feel to the table. This can lead to a little confusion when trying to determine what is what among the various caviars of the world. We’ve got a quick guide on some of the prominent and not-so-prominent kinds of caviar on the market.

Sturgeon Roe
Traditional caviar has never really gone out of style and remains one of the, if not the, most plentiful kinds of caviar available. The dark, black roe is in turn valued depending on the type of sturgeon and the age of the fish the roe comes from as well. Unhappily, this has lead to a number of problems in the world of caviar. The roe of the beluga sturgeon is the single most sought after kind of caviar in the world, but it is also no longer really harvested. Over-fishing has lead that particular species of fish to be critically endangered with the chances of any new beluga caviar surfacing regularly being incredibly low. Fish farms are offering an opportunity to potentially return to form over time and to find a way to humanely gather caviar, but for the time being most caviar will remain harvested from other species of sturgeon.

Other Roe
Outside of tradition, there are many fish harvested for their roe that end up being labeled caviar by enthusiastic marketers. The common ones typically vary depending on the area of the world. North America is fond of utilizing salmon and whitefish roe as forms of caviar that are somewhat easier to obtain than sturgeon roe. You should feel reassured that these don’t dominate the North American market as there are forms of North American sturgeon as well. Other countries are known to likewise harvest a prominent local fish to make their own forms of caviar as well. It is important to note that all of these are seldom considered “true” caviar and often look distinctly different from the black of most traditional caviar. The splashes of color and often lower quality do make them ideal for garnishing dishes or eating as part of a finger food though.

“Green Caviar”
Anyone found of traveling the world may have actually encountered a third broad kind of caviar in their travels. This so-called green caviar is found in dishes with relative frequency in the Philippines and neighboring areas. It isn’t a true caviar though. Green caviar is a form of seaweed that grows in shapes somewhat similar to caviar with small spheres. It didn’t take long for people looking at it to notice the similarities. Green caviar is not put through the same preparations as actual caviar and is frequently eaten as part of a salad or on its own with minimal accompaniment. While it isn’t a true caviar, it does pay to know about this kind so that you know what you’re ordering when you travel abroad.

Caviar is a much cherish form of food. Its status is as much about the good lifestyle it implies as the complex, briny taste that aficionados love. Depending on your opinion, the term may be far more limited than the market wants to make it seem. Just remember that all true caviar comes from sturgeons and that all other varieties are simply considered a variety of fish roe. It doesn’t make them any less flavorful though.